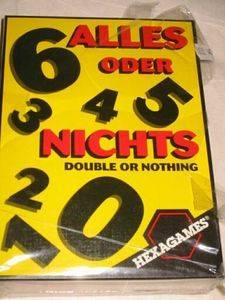 Game material 48 playing cards 42 trick indicator cards; 6 colored sets with values of 0 - 6 1 scorepad 1 pen 1 rulebook Description of the game The main task of the 3 - 6 players is to correctly assess their cards. They use a trick indicator card to declare the number of tricks they expect to take. If they're right, they get a bonus. It's also up to the players to decide whether they will openly announce the tricks they expect to take or whether they keep it secret. But beware! A face-up trick indicator card increases the possibility that the other players will be able to influence the outcome. With increased risk it's true that you get: "Alles oder Nichts (Double or Nothing)". A game last for seven rounds. Each player receives: in the 1st round - 6 cards in the 2nd round - 5 cards in the 3rd round - 4 cards in the 4th round - 3 cards in the 5th round - 4 cards in the 6th round - 5 cards in the 7th round - 6 cards After the cards are dealt, the dealer turns over the top card of the remaining cards. The color of this card is the trump color. After distributing the cards, players take the playing cards into their hand. Each player now judges for himself how many tricks he thinks he can take. Players select the appropriate card from their trick indicator cards and place it face-down in front of themselves Once all players have made their decision, the dealer, starting with the player to his left, asks each player if he wants to openly announce the number of tricks he plans to take (by turning over his trick indicator card) or if he wishes to keep it secret. Once each player has indicated his decision, the dealer asks the other players in clockwise order until all players, including the dealer have indicated their decision. Turning over the trick indicator card brings a higher risk but also potentially more points. Rules of play: Players must follow suit (play the same color as the card that was lead) if it is possible for them to do so. If a player cannot follow suit, he has two possibilities: 1. Play trump - play a card of the trump color 2. Throw off - play a card that is neither the trump color nor the color that was lead. You can never win a trick when you throw off. If no trump was played, the player who played the highest card of the suit that was lead wins the trick. If trump was played, the player who played the highest trump card wins the trick. If the trump color was lead, it must also be followed. If a player does not have any cards in the trump color, he must throw off a card with another color. Scoring Secret trick indicator cards: Players whose trick indicator cards were face-down get one point for each trick that they took. Players who took exactly as many tricks as noted on their trick indicator card get a 3 point bonus. Openly declared trick indicator cards: Players whose trick indicator cards were turned face-up only get points get if they take exactly as many tricks as they predicted. If they fulfill this condition, their score is equal to the number of tricks they took multiplied by 2 plus the 3 point bonus. Goal of the game The goal of the game is to have the most points at the end of the game.