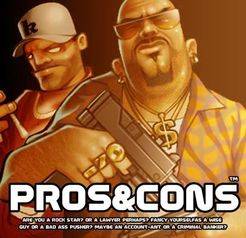 Pros And Cons: The Gambling Game For Professionals And Convicts. Pros and Cons is a gambling game based around the odds of throwing a specific number with two dice (7 being the most probable – 2 and 12 the least probable). Shrewd choices give players the chance of winning the cash put down by the others as well as being paid for services rendered. The object of the game is to win the money placed on the board by the players during a round. This can be done two ways, either by throwing your own number or by being the last person standing in a game. The game works by using six characters, each having their own particular winning number and stake. A player chooses which character they wish to play with (depending on how much money they have and their ability to throw that number) and then place their stake on the board, then the game commences with the Gangster… and then clockwise to the Lawyer. Players follow the dice instructions according to the number thrown. Adding more cash to the board if taxed, paying the other pros and cons for their services and trying not to roll OUT. The cash piles up until someone throws their winning number or all the players roll out and there is only one player left…The Winner.