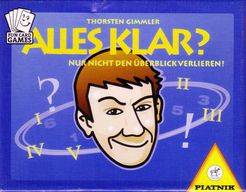 This is a clever little card game by Thorsten Gimmler and published by Piatnik. There are five cards with one of the roman numerals I to V on them. There are also cards in seven colors numbered 1 to 11 in each color (for a total of 77 such cards). The numbered colored cards also have zero, one or two roman numerals in their corner indices. Each player is dealt four cards and the five roman numeral cards are placed face up in the center. In turn, players play one of their cards and then draw another one from the deck. When a card is played, the player must turn over one of the roman numeral cards corresponding to a roman numeral on the card just played - if there is no roman numeral, no card needs to be turned, if there are 2 roman numerals, the player can choose which one to turn. If the card has already been turned in a previous round, the player does not need to do anything further. When only one out of the five roman numeral cards is left face up, the round ends and the cards that have been played are compared. The face up roman numeral card determines who has won the round - if it is the I, then the highest card wins; if the II, the second highest card wins; and so on. In cases of cards of the same number, the last played card of that number cancels the others already played. The player who played the winning card gets to keep all the cards played in that round. The game continues till there are no more cards left in the deck and a final round is played. The player who ends the game with the most cards wins.