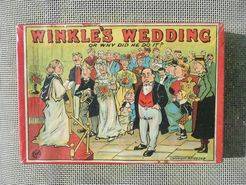 想玩 拥有
Winkle's Wedding or Why Did He Do It?

From the Publisher: The cards are equally divided up among the players, with the exception of one who has no cards but takes the book and reads out from it until a blank is reached, when the first player turns up a card and calls out the name upon it, followed similarly by all the other players in rotation.