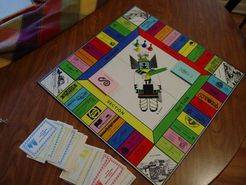 Ostensibly a Monopoly-style roll-and-move game, this apparently sparsely-produced game centered around Flagstaff, AZ, has players gaining property in a more abstract method. The board is laid out in the traditional square with properties lined up on each side and neutral spaces in the corners. Properties are colored in one of four colors which correspond to the "se-va" or money notes. Instead of purchasing properties landed upon, players instead arbitrarily pick up a note of that property's color when they land there, until one player has ten notes of that color and becomes "owner" of that color so long as they have more than ten notes of that color; when players subsequently land on that color they must pay the player that controls that color three notes of that color. If unable to pay three notes of that color, they must pay the banker or "Escrow Agent" five notes of any color. If a player does not have enough notes to pay the Escrow Agent, they are eliminated from the game. Though not spelled out entirely, the winner of the game is apparently the last player remaining. Additionally there are spaces on the board that correspond to the "Rattlesnake Pit" and "Kachina" decks, with the former as detrimental "se-va" losing cards and the latter as beneficial "se-va" gaining cards. As an editorial aside, some people refer to games as "Multi-Player Solitaire"; this game truly qualifies as such. The _only_ decisions that players can make that affect the outcome of the game are what colors of "se-va" notes to pay the Escrow Agent when they do not have enough of a single color to pay a property owner, and what color or colors to pay when they draw a "Rattlesnake Pit" card. Every other decision is governed by the state of the game and cannot be impacted by the players.