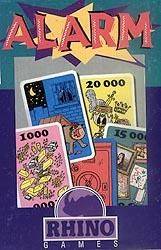 Bodo Boxo and his colleagues from the detective school, the sharpest watchdogs in the world are trying to protect Lord Schlotterderry’s treasures. Players try to plunder opponents safes while protecting their own. So the player who possesses the most stolen treasures at the end wins. Be careful, however: some safes are secured with an alarm system. And this barking, vicious alarm system is called Bodo Boxo! The game contains 110 cards, consisting of 80 treasure cards, 20 safe cards and 10 plus/minus cards. From the 20 safe cards, 15 cards show on the back the picture "Boxo Asleep Break-in Succeeded" and 5 cards show the picture "Boxo Awake Pants Torn." The 10 plus/minus cards are not played. They are used only to keep plus and minus scores separated. Each player gets all treasure cards of a color. The player then shuffles his treasure cards and puts them in a facedown stack on the table. Now each player uses the 4 safe cards: 3 with the picture "Boxo Asleep Break-in Succeeded" and 1 with the picture "Boxo Awake Pants Torn." to put his treasures in the safes. Players turn over the top 4 treasure cards from their stacks and put them in the middle of the table, side by side so that all players can see their values. Each player covers his 4 face-up treasure cards with a safe card, with the safe picture face up, but with the values of the treasure cards still visible. One of the safe cards is "hot," because it shows Bodo Boxo with a scrap of pants on the back. Each player decides which of his 4 treasure cards will get the "hot" safe card. The players cannot tell which of their opponents? treasure cards is "hot," since all safe cards look the same from the front. The first player then tries to break in to a safe. If the card from the safe shows BOXO ASLEEP then the BREAK-IN SUCCEEDED and the player takes the stolen treasure card and puts it facedown under his plus card. If the card shows that BOXO is AWAKE then the Boxo bites the player tearing his pants so the player gets caught and the value of the card from that safe is deducted from his score. The alarm has startled Lord Schlotterderry. He immediately attends to the remaining safes. The robbed player immediately puts all his treasure cards that are still in safes under his plus card! Now, the next player going clockwise takes a turn. If a player is not able to plunder because he is the only one with unopened safes, he must forfeit his turn. Play continues with each player taking his turn. Each player then replenishes his safes for another round. The game continues until 4 rounds of safe cracking are finished when each player adds up the values of his collected treasure cards. The plus points are added and the minus points are subtracted. Whoever has the highest score is the winner. Play 4 rounds are played. In each round, the safes are first filled with treasures, which one can plunder as long as he dares.