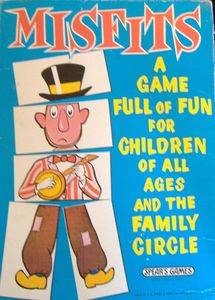 This is a newer version of a much older, traditional English children's game. There are 60 cards and they depict the hat, face body and two legs of a silly, cartoon-type character. At the start, each player has seven cards and the first to shout that they have a hat starts. The idea is to create full characters (5 cards per character). It does not matter which hat goes with which face, goes with which body etc...but legs must match! Each new character must begin with a hat and players must play a card each turn if at all possible. Each time you play a card, you draw another, and the winner is the player with the most completed characters after every card has been played.