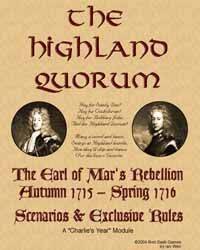 From the Manufacturer: THQ is a study of a less known Jacobite Rebellion, the '15. In 1714, Queen Anne, the last of the Stuart monarchs, passed away. Her successor by law was the German George Augustus Welf, Elector of Hanover, who became King George I. But the new regime was far from stable. Only the Whig Party - the forerunners of the Liberals - supported him. He consigned the Tories (the later Conservative Party) to the political wilderness for their part in making peace with France separately from the German states in 1713. The overt supporters of his rival, James Edward Stuart - the Jacobites - were forced to flee or go into hiding. George took the blame for most of the country's ills following the late War of the Spanish Succession. He relied too much on his Whig friends, which on the one hand gave Parliament more power over royal affairs than ever before, and on the other, encouraged many who would not otherwise have done so to support the Jacobite Cause of restoring the Stuart dynasty. One such man was John Erskine, Earl of Mar, late Secretary of State for Scotland, but now unemployed. Mar belonged to no party (if you except the Earl of Mar's Retirement Assurance Association, which was more of a special interest group) but he was identified with the old Tory regime and had ties to the Scottish Jacobites. He offered his services to George, only to be publicly snubbed. Frustrated, he traveled to Scotland, and began to fan the flames of rebellion. Scotland had suffered a political union with England in 1707, for which Mar was largely responsible. A persuasive man, he now began to organize a coalition of those opposed to the Union and those opposed to King George. The Loyalists, led by the Whig Duke of Argyle (who had ironically opposed the Union) were alarmed, but the Government took no notice, its members still scrambling for "places" under the new Administration. With the heather aflame, on the 6th of September 1715, the Royal Standard of the Stuarts went up on the Braes of Mar, before a crowd of 600 that would shortly swell to over 12,000. But, as the Standard went up, the gilt ball on the top of the flagpole fell offä