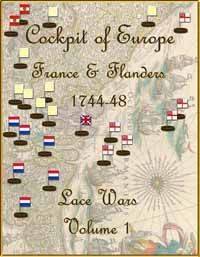 From the Manufacturer: Cockpit of Europe (CoE) covers the campaigns of the War of the Austrian Succession in the Flanders theater between 1744 and 1748. From 1741 to 1748, the War of the Austrian Succession raged on the continent of Europe. From 1743 on, Britain and France were formally at war. The French leadership were divided into two schools of thought. The traditionalists believed that the Habsburg dynasty was the primary threat to France's position in Europe, and that the main thrust of the war should be made against their possessions in Italy and Germany. The other school feared the rise of the Maritime Powers (England and Holland) and counseled a hard blow in that direction. CoE looks at the five years that the French spent in the Low Countries attempting to smash the ring of enemies surrounding them. Even though the French, thanks to the sublime leadership of their German-born Marshal, Maurice de Saxe, conquered Belgium and invaded Holland, defeating every army sent against them, the campaigns resulted in a draw. The subsequent peace merely restored the status quo. The stage was then set for the titanic Seven Years War. Nevertheless, there is great scope for you as the King's Captain General. The armies involved were the largest yet seen on a European battlefield &amp;#8800; the French fielded over 200,000 men, and the Allies tried their best to match them. The region is relatively compact, yet difficult to operate in, with the open country thickly studded with fortresses and cut by rivers. Seaward are tracts of swamp and fenland. On the other flank are the dense woods and rugged hills of the Ardennes. The French player, with the strategic initiative, must constantly press forward, laying siege to town after town (and leaving many men idle in garrison), as he seeks to lever the Allies away from the French frontiers and ultimately threaten the Allies' own bases of operation. The Allied player must decide whether to defend everywhere, to bide his time and harass the enemy, or to launch an offensive of his own. Even if he makes the right choice, however, he must still get the agreement of all the nations under his command