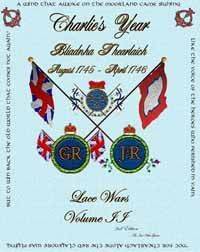 From the Publisher: As the title indicates, Charlie's Year covers the events of the last real threat to the Georgian regime of Great Britain and to the social, economic, and philosophical gains of the Glorious Revolution. From 1741 to 1748, the War of the Austrian Succession raged on the continent of Europe. From 1743 on, Britain and France were formally at war. In late August of 1745, Charles Edward Stuart, better known as Bonnie Prince Charlie, landed at Loch nam Uamh with seven men, raised the Standard of the outcast Stuart kings at Glenfinnan, and gathered to himself an army to challenge the might of King George II's realm. Composed of wild Highlanders, Lowland peasants, discontented gentlemen and diehard Jacobite nobles, the Pretender's army defeated the local garrison forces and laid all Scotland at his feet. A descent on England should now have given the Prince's reluctant French allies the diversion they needed to invade. Marching on London however, the Jacobites lost their nerve after reaching Derby and retreated, pursued now by the best regiments of the British Army. The French, working with information a couple of weeks out of date, were still not ready to aid them. Confronting each other at the battle of Falkirk in the winter of 1745, neither side appeared to prevail, and both withdrew to lick their wounds. However the tide of war was now firmly against the Jacks, and they withdrew again into the mountain fastnesses of Scotland, hoping to wage a guerrilla war and so encourage the French. The idea proved impractical, especially in mid-winter, and in the wet spring of 1746, the British Army under the Duke of Cumberland met the remaining Jacobite forces under Charlie himself at the battle of Culloden and crushed them. While Scotland suffered the fire and sword of the conqueror, the Prince flitted through the heather, and after many romantic adventures escaped to France, never to return. His allies the French were unconcerned, as the withdrawal of the British Army from Flanders allowed them to seize the vital port of Antwerp and a number of key fortifications necessary for taking the war to the Austrian Netherlands. At war's end, the price for surrendering these gains would be the fortress of Louisburg, Nova Scotia and the temporary restoration of French colonial dominance in North America. Expanded by: Highland Quorum