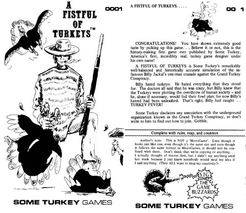 "Some Turkey Games" (aka Metagaming) released this game after Steve Jackson left to form Steve Jackson Games (SJG). The game is printed on a large, single sheet that folds down into a microgame size plastic bag. This copies the style and format of the first releases from SJG (Raid on Iran, One-Page Bulge, and Kung Fu 2100). While not a very exciting game, it is a playable two-player hex and counter game where Billy has to "splat" six turkeys in less than ten turns within the confines of the turkey hatch. More interesting than the game itself are all of the parody touches, such as a bogus author introduction, an angry letter from a customer, a fictional game list, silly versions of major game company logos, and the manner in which "Some Turkey Games" is printed at the bottom of the cover (copying the style used on the early SJG games).