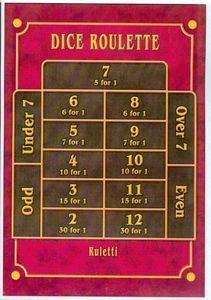 This game uses special dice that act as a Roulette Wheel. The black die shows a blank on one face and the numbers 1, 2, 3, 4 and 5 on the other five faces. The white die is numbered 1 through 6. A player rolls the dice and reads the black die first and the white die last. So if a 5 and a 2 are thrown, the number generated would be 52, and if the numbers are Blank and 6 the number generated would be 6. The game comes with a table layout that resembles a standard Roulette layout although the numbers are shown in a 6x6 grid. Most, but not all, Roulette wagers (numbers, columns, dozens, black/red etc.) may be made, and the payoffs are the same as a standard game of Roulette.