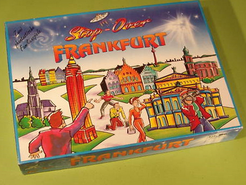 Stop-Over Frankfurt has two modes of play. In the first mode, players assume the roles of reporters who are trying to get an exclusive scoop of UFO sightings in the city of Frankfurt, Germany. Each player is assigned a color and a transmission tower. Their goal is to transport photographs of extraterrestial visitors at locations in the city to their towers (transmitting the scoop back to their news agencies). Each player starts with one photo card, and take turns to roll a die, moving their card by the die's result. They draw new photo cards on a "6". The reporters can deploy Stop Stones to stop other reporters from moving through. The first reporter to transmit back three photographs wins the game. The second mode of the game is called Top Secret, which is played on the other side of the game board. The game takes place in the news agency and players are racing against time to dig out what the others know. Each player thinks up a secret word at the start. On their turn, they roll a die, move their marker by the result, and can ask another player for one letter of their word. Players get points for guessing another player's secret word (which then has to be thought up anew). The game ends when one player's marker reaches the end point and the winner is the player who has the highest score.