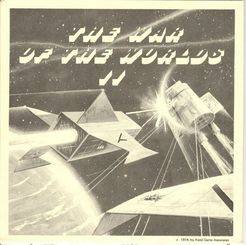 From the Rules Folder: "In the days before technology permitted instantaneous movement across the light-years of space, humanoid beings fought the first inter planetary conflict in the constellation Aquila (The Eagle) with the planetary system of the star Altair. The origin of the conflict dated back to the beginning of the instrumental exploration of the system in the last decades of the 20th century. A band of five Altair planets was found to be rich in rich in raw materials in short supply among certain planets in nearby stellar systems. Planets from three such stars began immediate plans for colonization and exploitation. At the games beginning, the invading planets have each established a base of operations and, recognizing the threat from each other, have launched a fleet of three immense "Command Ships" to further colonize, defend and conquer the Altair system. Now, THE WAR OF THE WORLDS II allows you to recreate this classic campaign in the depths of space. Two or three players, each taking the role of Commander-in-Chief of an invading fleet, use the mapboard, 86 counters, and rules of play, to replay future history."