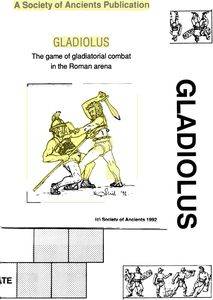 想玩 拥有
Gladiolus: the Game of Gladiatorial Combat in the Roman Arena

A simulation of single combat between gladiators in ancient Rome, based on a system of drawing and playing from a pack of combat cards. Each gladiator (represented by miniatures or counters on a combat map) has a set of cards giving options suitable to his style of fighting. The players maintain a hand of combat cards from which to choose their actions. The game is played in alternate moves, and features a hidden "hole" card, chosen by each player at the end of each turn, and revealed at the start of the next turn. Six types of gladiators are represented.