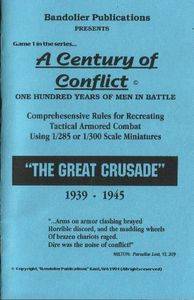 Designed primarily by John Fernandes (a name familiar to many that have ever played/tested some of the early S.P.I. and S&amp;T games), this is a series of Booklets detailing an easily comprehended miniatures Rules Set. He decided to produce a much simpler system for conducting 'minis' Combat in order to accustom folks to the entire idea of using them. There have been numerous attempts at this, but very few succeeded(if any), and his 'entry' is a long way towards fulfilling this accomplishment. What you get are a very large Ziploc Baggie to store it all within; (3)Booklets(designed for 1/285, 1/300, 15mm, or even 20mm); (1&amp;1/2)-Full Color Sheets(providing Terrain Markers, a 'Compass', &amp; 'Firing Arcs' for Guns &amp; Target aspects); a "Combat Results Table" with the "Sequence of Play" on the reverse; a "Terrain Effects Chart" while on it's reverse are the "Range Effects", "Mine Attacks", "Command Efficiency" Tables &amp; a "Movement Orders Chart" with a "Scatter Diagram"; a "Unit Roster Sheet" while on it's reverse side is the "Artillery Fire Target Plotting Chart"; there is a sheet of "Unit VALUES Card" while on the reverse of this are markers for "Wrecks", and small 'S' &amp; 'D' ones; and Players will need to provide at least (1) or more DICE of the '12', '8', &amp; '6'-sided variety, before commencing play. Players are given permission to copy anything pertinent to the gameplay using this 'system', and it is highly suggested for some items. Of the (3) Booklets included, the 'Minis' one is '28' pages long and details the Rules system; the next one is the "Consolidated Weapons Data" that is '24' pages, along with some 'Supplement' Sheets; and the last one is the "Tables of Organization &amp; Scenario Design" which is '60' pages long. The "Rules" explain what to do during the "Sequence of Play" which is detailed as follows: 1)-Joint Plot Phase; 2)-Initiative Phase; 3)-Posture Determination Phase; 4)-Joint Indirect Phase; 5)-Joint Direct Fire Phase; 6)-Joint Movement Phase; &amp; 7)-Marker Removal Phase. The "Consolidated Weapons Data" Booklet (and 'Supplement' Sheets) provide detailed information for many Nation's weapons and vehicles that are associated with them. There are even individual 'stats' for BOTH of Spain's "Civil War" participants(the Nationalists &amp; Republicans!). The "Table of Organizations and Scenario Design" Booklet gives detailed make-ups of various Nation's Units and even during different periods of the entirety of World War 2! With these at your disposal, you should be up and running your own 'minis' based "Wargame" in very little time.