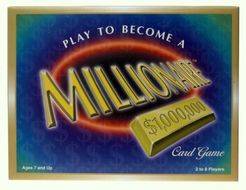 In the party card game, "Play To Become A Millionaire", players divide into two teams, and try to be the first team to earn a million dollars. In each round, a team tries to earn money by winning tricks in their teams' "secret color". At the end of the final round, the values of the cards won in tricks in the secret color, plus any wild cards, are added up, and the team is then paid. The first team to exceed a million dollars wins. Mechanics include bluffing, trick-taking, and suit-following, and teams are fined money for not following suit appropriately.