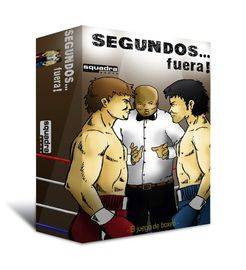 SEGUNDOS…fuera! is a game where you are one of the boxers facing up tonite fight. The goal is to beat your opponent. You can get it by K.O. or by judges scoring at the end of the fight (going to the scorecards). The game consists of 12 rounds as in a boxing match. You have a number of attacking and defense cards (value from 1 to 5) that can be managed each round. There are different cards: attacking cards ( punch and feint+punch ) defending cards ( block and dodge ) Cards are played following a few simple rules. This will affect ENDURANCE and DAMAGE tracks of both fighters. Damage points can get a knockdown (and you´ll have to try if your boxer stands up or not) and if there are cuts. You have 100 endurance points to manage all over the fight. The way of playing cards sometimes is face down or face up (bluffing mechanic). If you play smart, you'll see it only doesn`t depend on the cards value, but also the way you raise your strategy in each round. At the beginning of each round, there will be an auction using endurance points to see which boxer has initiative for that round. Feints, blocks, damage, punches, endurance, counter attacks, combos, initiative, knockdowns, knockouts... are some elements included in this funny and strategic boxing card game where you get a highest interaction each time the bell rings. Depending on your cleverness and the correct strategy the referee will raise your arm or your opponent´s at the end of the fight. You´ll win by a knockout or you´ll finish kissing the canvas. Welcome to the Sweet science...!