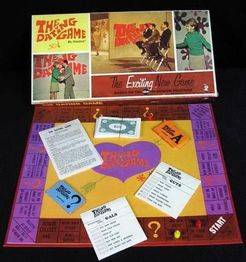 Four players, two males and two females play the game. Players traverse the gameboard according to the dictates of two dice and follow the directions upon the space landed. To win the game a player must collect $100, match five questions and/or answers with a player of the opposite sex, check off all seven items of a list and have landed on the “Meet Date Here” space with a player of the opposite sex who has done the same. The game is very loosely based on the television series of the same name. --- Information in American Games lists that there was perhaps a "Party Pack" version of this game that was packed with a 45-RPM record, produced by ABC Promotions.