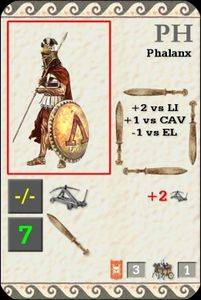 Acies is a non-collectible (all cards are free to download and then print as many copies as desired) card game of ancient combat. Units and tactical cards are drawn from your main deck into your hand, which can be replenished once using a reserves deck. Units are played from your hand into the field of battle, which is divided into the center and flanks, and also into your first line, your opponent's first line, and the melee line, while tactics cards are used, well, for tactics. Combat is resolved using a unit's combat values and a d10 roll, and all combat is single unit against single unit.