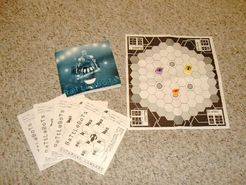 From the rulebook: BattleBots is a game in which each player controls a 'Bot in a futuristic arena. In the basic game, players are familiarized with the Arena rules, which stress fairness among participants. Once players have a good grasp of the game mechanics, they can move onto the Optional Rulers [sic] for a more challenging game. BattleBots consists of two parts, construction and team play. During construction, players design their own 'Bots based upon the scenario being played. After the players have recorded their 'Bots on 'Bot sheets, they are ready to enter the arena." This is a very small game--it came in a CD jewel case. The components consist of small stand-up counters representing the BattleBots, an "arena," and log sheets for the characteristics of one's BattleBot. More information was (and perhaps one day will be again) available at the publisher's website, www.snarlingbadger.com.