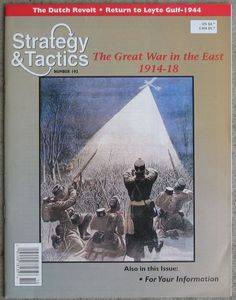 Two separate games (common rulebook and two different maps on one mapsheet): Brusilov Offensive: Imperial Russia's Last Campaign, 1916 "The Brusilov Offensive is a simulation of the massive Russian offensive against the Austro-Hungarian army and its German allies along the Galician front in June, 1916. In terms of territory caputerd and losses inflicted, this offensive was the most successful operation conducted against the Central Powers during the entire war. the failure of the Russians to eliminate the Austro-Hungarians from the war dictated their eventual military collapse, deepening the despair that was a factor in fomenting the "October Revolution" of 1917. In addition to the historical scenario, several other scenarios have been provided, illustrating various options and possibilities that could have affected the battle. The Game Scale is 14km from hexside to hexside and 72 hours per Game Turn." Serbia/Galicia: Austria-Hungary at War, 1914 "Serbia/Galicia is a simulation of the two front war Austria waged during the opening months of World War One. In the south against her tiny neighbor Serbia, and in her own province of Galicia against Russian invaders. Austria learned the brutal lessons of 20th century warfare." 16 p. rules.