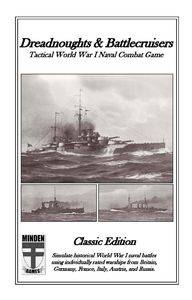 Dreadnoughts &amp; Battlecruisers is a tactical level game of naval combat during World War I. With this game, you will be able to recreate most any actual or hypothetical major naval engagement that occurred or could have occurred during the Great War. D&amp;B was designed by Gary Graber, the designer of both Jellicoe vs Scheer and Escape of the Goeben that appeared in Panzerschrek magazine. D&amp;B combines the ships and rules that appeared in these two games, and has added 147 new ships, new optional rules, new scenarios, and 25 blank ship counters to give gamers a comprehensive package covering the fleets of 17 nations from around the world. A brand new class of ship--the light cruiser--makes its debut in D&amp;B. Over 40 CL are included, along with new optional rules for their use. Besides these light cruisers, additional ships from Argentina, Australia, Austria-Hungary, Brazil, Britain, France, Germany,Greece, Italy, the Netherlands, Norway, Russia, Sweden, Turkey, and the United States are included in D&amp;B. What's Included: 24 page rulebook, ten 8.5"x11" cardstock counter sheets (345 ships plus 25 blanks), game markers and templates, and a small color sheet of counters. D&amp;B components must be mounted and cut apart prior to play. New optional rules include Light Cruisers, Modified CA Gun Range, Rough Sea option, Battlecruiser Vulnerability rule, Low Ammunition rule, and a new optional method for determining victory points. The optional rules originally given in the Jellicoe/Goeben Supplement (Panzerschreck #10) are included, plus new optional rules covering Light Cruisers, Modified CA Gun Ranges, Rough Sea, Battlecruiser Vulnerability, Simultaneous Movement, Low Ammunition, and a new way to calculate Victory Points, and more. Scenarios (18 in all) include Jutland, Dogger Bank, three North Sea scenarios Goeben vs Battlecrusiers, Escape of the Goeben, Black Sea/Adriatic/Baltic Sea scenarios, Last Sortie of the German Fleet, and several Free Form and Introductory scenarios. The possibility of "design your own" situations are almost limitless. To quote the Designer's Notes, "Dreadnoughts &amp; Battlecruisers is a simple, introductory game of World War I battleship combat. It does not aim to be the last word in Great War naval simulation; it does aim to be a fun, accessible, and competitive "first word" on the subject."