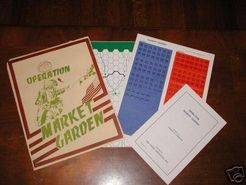 Operation Market Garden was the audacious plan to seize a bridgehead across the Rhine River in Holland, 1944. Though scale is not mentioned it appears to be operational level (the Allies have fourteen "5-3" parachute units, as a gauge). This game features weather effects and special rules for airborne drops, armor attack and engineers. Optional rules include a "Short Hook" objective for the Allies occupying the towns of Goch and Doetinchhem instead of closure to the North Sea. 238 die cut counters (Allies are blue, Germans are red), 12-page rulebook, a 24" x 28" three color map sheet, and a cover sheet. A six-sided die is needed as well as some paper and pencils.