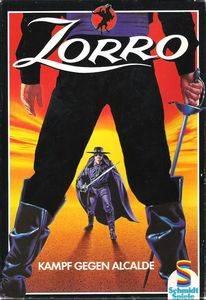 The first of Andreas Seyfarth's Zorro games. The second is Zorro. "Prepare to fight, coward!" With these words Zorro demands his worst adversary, the common and underhanded Alcalde, to the fight. But Alcalde - cowardly as he is - entrenches himself behind his numerous soldiers and lets them fight for him. Will Zorro nevertheless succeed to force a fight with Alcalde - man against man- and defeat him? (Translation by Rob Derrick) 6 two-sided games boards, each with 6 spaces holding different numbers of Alcalde's swordsmen. The Alcalde 1 Special die 4 differently colored sets of: 2" die cut Zorro figure with stand Horse counter 6 die cut cards