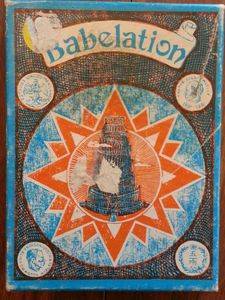 Babelation cards are quartered with Nations, Capitals, Official Languages and Monetary Units on each. Each player receives an Index to tell which quarters match on various cards. The instructions list rules for playing three different games with the cards, however many games played with a standard deck of cards could be played with Babelation cards. 1. Pico - A gin rummy type game for two players. 2. Crazy Azy - A Crazy Eight’s type game for 2-6 players. 3. Mates - A Concentration type game for younger players. An example of how the cards work is as follows: Card 69 has Italy in the Country quarter, card 26 has Rome in the Capital quarter, card 25 has Italian in the Language quarter and card 56 has Lira in the Monetary unit quarter. In order to win, you would have to collect four these cards to complete a set.