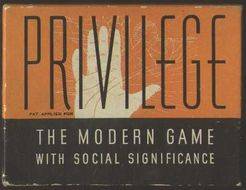 Privilege is a trick-taking game featuring a 5-suited deck with 2 unsuited trumps. Players play in fixed partnerships and bid for how many over-tricks they believe they will take. The partnership making the high bid may be challenged by the others, who can potentially double or treble their score, but can re-challenge ("fight to the finish") for quadruple points (all of these have large negative consequences if one loses). The trick play is more or less standard, with two exceptions. One is the pair of unsuited trumps, which rank below the top four cards of the trump suit. The other is that the five suits are grouped into a pair and a triplet, and the suits in each set can be played for each other at times (the rules are a bit confusing here). Scoring is reminiscent of bridge, with points earned above and below the line. While the main game is for exactly four players, a solitaire game is included. Probably the main point of interest is the game's 1930s Socialist flavor. The good suits are Scientists, Idealists, and Judges, with the bad ones Bankers and Advertisers. The cards are individually named, some for people and some for methods and tools ("Radio," "Logic," etc.). The unsuited trumps are Honesty and Kindness. Also of interest are the card illustrations. Some were done by the designer, but the others by well-known American artists of the period - Rockwell Kent, Peggy Bacon, William Gropper, and George Schreiber (other cards were by Esther Vance, who appears to not have attracted much attention in the art world). The game was self-published by the designer, Robert Morey. The game was manufactured as a custom job for him by Alderman-Fairchild of Rochester, NY.