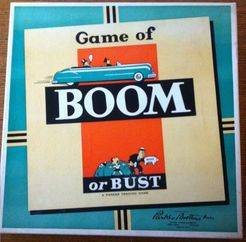 "HOW THE GAME IS PLAYED: Players move around the Board according to the throw of Dice. Properties such as Beauty Parlor, Department Store, etc., are bought and sold at prices that rise and fall quite unexpectedly depending on whether the conditions are NORMAL, BOOM times, or BUST (depression times). The game is quick moving and amusing. The game ends when all but one player becomes bankrupt and this surviving player WINS THE GAME. If the players prefer, a time limit may be set at the end of which time the player owning the greatest amount of property and cash (when added together) WINS THE GAME." The Board has 16 properties (4/side) with purchase price and rent printed on the inside of each space. The Board has NORMAL prices printed thereon. A removable panel, which fits over two pegs in the center of the board, has BOOM prices and rents on the obverse and BUST prices and rents on the reverse. The game starts in NORMAL cycle, changes to BOOM cycle, then to BUST cycle, then back to NORMAL, etc., when any player lands on any of the three corner spaces marked with a Star. (The fourth corner is "Start Here.") Players try to increase their worth by buying properties at BUST or NORMAL prices, and selling properties at BOOM prices, while trying to bankrupt their opponents by collecting rents, the highest of which is $250,000. The standard rule concerning landing on Un-owned Property is "buy it or leave it." There is an AUCTION option in the Rules, similar to the Auction Rule in Monopoly. This game plays like a simplified version of its more famous stable mate, Monopoly, but with the unique twist that all properties' values increase or decrease at the same time, sometimes in rapid succession, without having to develop the properties or have groups or sets. The raised playing field (Board) actually sits in the 15"x15"x2" box bottom (it is not designed to stand alone). It has a slot on the outside of each property space, wherein the owner places his/her like-colored "T-card" vertically to show ownership. The bills, which are the size of older Monopoly games, come in denominations of $100, $1000, and $10,000. There are also blue/white discs worth $5,000 and silver/blue discs worth $50,000. Four painted wooden markers (red, blue, green, yellow) and two white dice complete the equipment. The Rules sheet states "Questions on the rules for BOOM OR BUST will be answered gladly if 3-cent stamp is enclosed."