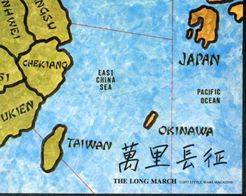 Found in issue #7 of Little Wars magazine, fall 1977 (the game is also described in the rules as “Baselisk Game #2"). Tactical Studies Rules (TSR) published a total of twelve issues of Little Wars magazine from 1976 to 1978 before folding it into The Dragon. Components 1 11x17” area map of China and Southeast Asia 160 uncut, unmounted counters 4 pages of rules 1 page of game historical background Counter Manifest 50 red (Communist Chinese) counters: 2 4-strength armies, 2 2-strength armies, 19 1-strength armies, 24 control markers, 1 Mao marker, 2 blanks 49 blue (Nationalist Chinese) counters: 1 4-strength army, 2 2-strength armies, 18 1-strength armies, 1 air force marker, 24 control markers, 1 Chiang marker, 2 blanks 56 yellow (Japanese) counters: 2 2-strength armies, 21 1-strength armies, 3 air force markers, 24 control markers, 2 blanks 4 green (British) counters: 4 1-strength armies 1 turn marker What the designer says : Long March is a game for three players (there is a two player scenario) about the struggle for control of China during and immediately following World War II. It is 1942, Japan is at the height of her expansion into Southeast Asia and the Pacific, yet China stands defiantly unconquerable. As the Japanese player, you must carefully pit the Chinese factions against each other while using your superior military machine to bring all of China under your control. As the Nationalist Chinese player, you must cooperate with the Communists (however distasteful that may seem) to drive the invading Japanese from the shores of China before re-establishing your authority as the only central government of China. As the Chinese Communist player, you too are faced with an enemy worse than fellow Chinese. You must first drive the Japanese from China before you can put your superior guerrilla tactics to work against the corrupt Kuomintang. Player’s Value: This is a simple game with undemanding rules (movement two areas per turn, roll dice in simultaneous rounds of combat, each “1” is an elimination and each “6” is a retreat, minor variations on this for leaders, air forces, etc.). It hustles right along at six months per turn, with a variable exit point for the Japanese. The game is unusual in that it is designed primarily for three players, any one of which has a good shot at winning the game (if the Japanese player wins, the two Chinese players can play a Civil War endgame to see who comes in second).