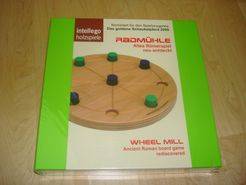 A reconstruction of a boardgame played in ancient Rome. The authenticity of the game is uncertain. This game is based on Mill, one of the oldest known board games. During excavations near former Roman border fortifications, a copy of Mill has been discovered. In Radmühle (Wheel Mill), players try to form their three token into a line including the central space. Three tokens on the wheel is not considered a mill. The pieces are moved along the diagonal or the circumference to the next free intersection. A leap over one other piece is permitted. Very tactical game that might go on forever. Usually ends after one players makes a crucial mistake of letting the other build a situation with two possible winning moves.