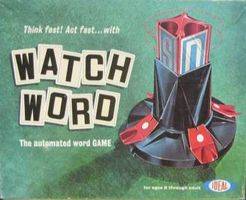 Players play with a hand of six cards with four community cards loaded into the card-revealing machine. As the machine rotates, the cards that are loaded spin and are slowly revealed. When a player thinks that they can use a card that is in the machine, they press the switch in front of them to stop the tower. They then have to take the card that is in front of them and use it with any number of the six cards in their hand to make a word. Points are scored based on the number of letters used in the word. Players play to an arbitrary point total. Like a number of Ideal games, this game is based around a contraption. The cards have letters that are formatted to be difficult to discern when only partly revealed.