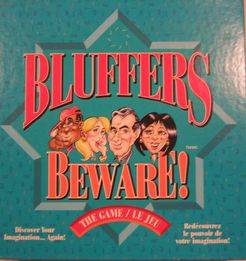 Easiest way to describe Bluffers Beware is "Balderdash with pictures." Rather than making up definitions for obscure words, players make up descriptions for pictures of obscure (antique) objects. The game can support more then six players by dividing the group into two teams. One team will attempt to guess the correct answer while the other team attempts to mislead them by giving believable definitions. As in Balderdash, one player (the TRUTHTELLER) gives the actual definition while the remaining members of the team (the BLUFFERs) give made up definitions.