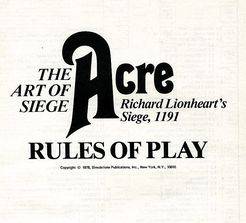 Acre simulates a crucial battle in the centuries-long war called the Crusades. The port city of Acre was considered key to the possession of nearby Jerusalem. In 1191, after a siege of almost three years, Acre fell to the Christian Crusaders under Richard the Lion Hearted, King Philippe of France, and King Guy of Jerusalem. Part of the Art of Siege quad.