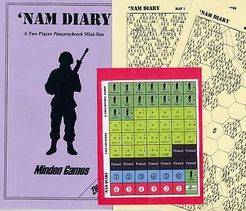 Nam Diary is a "mini-sim" published in Panzerschreck Magazine #6 (Summer 2001) and later made available as a stand alone game. From the introduction: It is late afternoon in mid-April, 1968. On patrol near the DMZ, Pfc. Bomar Henry is about to get his first taste of a Vietnam firefight. Will he live to tell about it? 'Nam Diary is a short and very simple game of strategy for two players. One player controls seven US soldiers, while the other controls eleven North Vietnamese (NVA) soldiers. The game includes a map depicting a jungle trail, a few dozen unmounted counters, and brief rules.