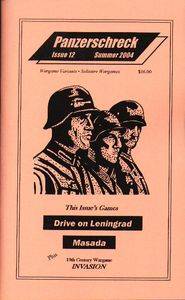 Panzerschreck Magazine #12. This game covers the German Army Group North's drive on Leningrad in 1941, with corps and army-level counters and one week per turn. This issue also contains two "mini" games, Masada (covering the Roman siege of 72-73) and "Invasion" (a reprint of a 19th century game on a possible invasion of England). As with all Panzerschreck issues, these games must be assembled prior to play.