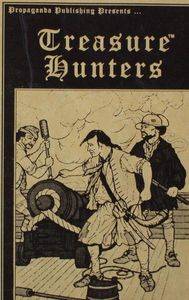 Treasure Hunters is a ziplock-bagged game that comes with a rulebook, a map and 20 cut-out pieces similar to "cardboard heroes." There's also a cardboard "X" for marking the spot. There are ten pirates on red cardstock and ten on green cardstock. You'll also need two d12s. It's a simple game of two teams of pirates on a Caribbean island trying to get to the "X marks the spot" treasure before the other. Combat is both ranged (muskets and flintlock pistols) and melee (cutlasses). Before the game you have to assign powers to your ten pirates. You have 100 points, which must cover two categories: speed and combat ability for all ten pirates. Minimum number of points in a given category is 1, maximum is 10 - otherwise, you're free to spend them as you wish. You can make a few mega pirates with high speed and combat and hope your shlumpfs can dig up the treasure while their superior comrades hold off the enemy. Or you can make them all equal - your choice. There are a couple of charts for combat, including a ranged combat table and a penalty to your defense table, based on how far you moved that turn.