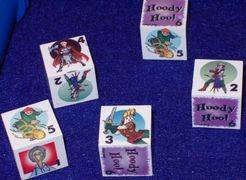 The game comes with short rules, a pad of scoring paper, and five dice. The dice show the characters from the comic book Knights of the Dinner Table: 1 = B.A., 2 = Bob, 3 = Dave, 4 = Sara, 5 = Brian and 6 = Hoody Hoo! The theme is RPG characters dividing up treasure after defeating a dragon. The score sheet lists 11 items, with six "voting" blocks for each item. Most of the items are positive points; some are worth more to certain characters than to others; one gives negative points and one is neutral, but grants a special ability the second and third round. Each player takes on one of the roles and has his/her own score sheet. It's an interesting Yahtzee variant, where you roll the five dice three times on your turn, keeping any faces you want. You then assign the faces on your own score sheet. Once a player is done, the next player takes his turn, etc. When all have gone, start a second round. The first two rounds are public knowledge: if asked, you must tell how you voted on a given item. The third round is secret, however. After three rounds, count up the votes for each character for each item. There are tie-breaking rules. High score wins. During the game you can make deals and break them - this will be no surprise if you've read the comics. You must record your votes in ink, though!