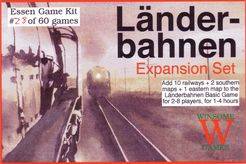 The Länderbahnen Expansion Set adds 10 railways and 3 map sections to Länderbahnen, allows for 3 more scenarios and allows the game to scale from 2-8. The expansion set was originally produced in a limited edition of 60 and was packaged in its own box. The second "Combined" version of the base game came with the Expansion material included.