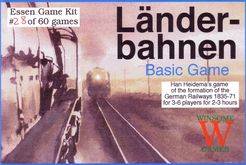 Länderbahnen is a crayon track drawing and market game, and is the second entry in the Riding Series. Länderbahnen covers the historical formation of the German Railways in 1835 through German unification in 1871. The rules are available in German and English though individual copies will sometimes feature only one of those languages. The game was originally produced in a limited edition of 60, though there was a second printing which included the Länderbahnen Expansion Set, which adds more maps and allows the game to scale from 2-8.