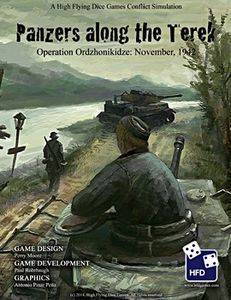 Covers Operation Ordzhonikidze in the Caucasus in 1942 where the Germans achieved their furthest advance. - - - From the publisher's website: November 1942. The 3rd Panzer Corps with the 13th and 23rd Panzer divisions penetrate the furthest into Russia. Advancing along the Terek river and armed with 150 tanks, they meet token resistance from the Russian 37th Army defending the approaches to Ordzhonikidze, the gateway to the Caucasus Mountains. Hitler demanded that this key city be taken and Operation Ordzhonikidze begins on October 31st. The two panzer divisions advance through the snow and mud, while their comrades to the north are stopped cold. With the Terek to the north and the Caucasus to their south, the spearhead now grinds towards its objective. Resistance increases with each kilometer. The enemy is on both flanks of the spearhead! Stalin arrives to stir the defenses with elite NKVD troops and four tank brigades armed with new lend-lease tanks: the American M3 Lee and Stuarts, British Valentines and the new T34As from Russian factories. Bunkers are built and antitank fronts await the panzers. The Germans advance meter by meter and by Nov. 6, are within a few miles of the objective. However, the Russians attack and cut off and isolate the 13th panzer. The 23rd panzer cannot help as it is attacked from the flanks. The 13th panzer struggles to survive and the SS Wiking finally arrives to save the division from being destroyed! - - - Contains 280 counters, one 11"x17" map. Scale is one day turns, one mile hexes and company to regiment units. Rules cover air, rocket, armor trains, conventional and AT combat, assaults and mobile attacks.