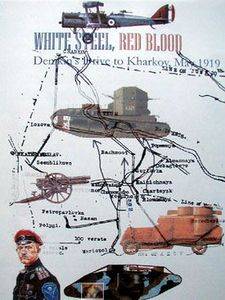 WHITE STEEL, RED BLOOD covers the Drive to Kharkov in May 1919. This was the first major offensive using Denikin's rebuilt elite Volunteer army now armed with British Whippet, Mk V tanks and supported by DH9A bombers and Re8 light bombers. It was an offensive that would expand the White front by nearly 100 miles within 30 days. It was the first time the Bolshevik army had faced tanks and air support. It was the debut of the 1st Russian Tank battalion (called "Denikin's secret weapon"). The game comes with one 11x17" color map, over 180 beautiful counters and 15 pages of rules. The game length is 8 turns. Scale is 6-7 miles a hex, counters am brigades, tank and aircraft sections. The game stresses 'tactical advantages" in their correct use, two types of attacks and much mom