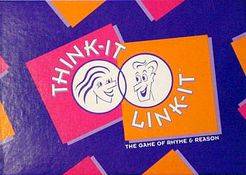 "The Game of Rhyme &amp; Reason" The object of the game is to guess paired rhyming words based on the clues given on each card. Each card gives four clues: 1) A syllable clue--for instance "Think Link" indicates two one-syllable words,Thinkit Linkitindicates two two-syllable words, etc. 2) A link clue--synonyms for each word in the answer are given, "Enormous Toupee" for "Big Wig" for instance. 3) A letter clue, which gives the first letter of each word in the answer. And 4) A phrase clue, "Covers a bald spot" for "Big Wig" for example. On a player's turn, another player chooses a card and reads the syllable and link clues aloud. If they guess the answer correctly, they score the points printed on the card (either 5 or 10--cards are double-sided with easier 5 point links printed in blue on one side and harder 10 point links printed in orange on the other.) For each additional clue given, one point is subtracted, with the player losing a point from their score if they fail to guess it after all four clues have been given. It is suggested in the rules that participants play to a score of 100. This game was published in two editions: a pocket edition with 50 cards, and a deluxe edition with 500 cards. The pocket edition also includes a small pad of paper and a pencil for keeping score. In 2005, a new deluxe edition was released with 1000 cards, and new pocket editions: Classic, Junior, Sports, Genius, Food &amp; Cooking, and Science, Animals &amp; Nature.