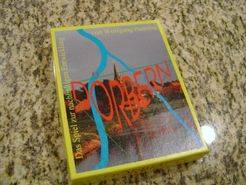 Dörbern is a card game that has players attempting to win sets (tricks) of cards from each other. The game takes its name from a German town; various photographs of the community there are printed on the cards. The cards are dealt to the players, giving them each 10 cards in hand. They then pass two cards to their player on the left. One of them (the starting player) plays a card on the table. The following players must put down a card of the same color; otherwise, they play a card of another color. The winning card is the one with the highest value and of the same color as the first card played. The winning card's owner collects the entire set and gets to be the starting player for the next round. However, the owner of the card with the lowest value and of the same color as the winning card takes the highest value card in the set. The game then continues with the next round of passing, playing, and scoring the cards. The game ends when all cards have been played and collected. The players total up the values of the cards they have taken, and whoever has the most points is the winner.