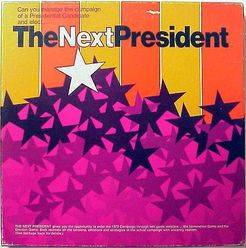 The game comes with separate rules for The Nomination Game and The Election Game. The Nomination Game puts players in the role of campaign manager. Each player records the number of points one wants to commit for each of twenty-two state primaries. The one who commits the most to each state wins it.After the last state has been contested, players move on to The Convention phase where players once again bid to win the remaining states. If no player has the 769 votes needed to win the game. The player with least number of votes drops out and the process is repeated until there is a winner. The Election Game simulates a presidential election. Both players choose a candidate for president and vice president. Play is simultaneous. A round consists of each player collecting campaign funds, revealing three event cards, secretly allocating resource markers, revealing those allocations and determine campaign results. This goes on for six rounds and then it's Election Day. The results of the campaigns are realized and the player with 270 or more Electoral Votes is the winner. The game comes with statistics for all of the major candidates from 1972 and fifteen historical candidates such as Andrew Jackson and Abraham Lincoln.