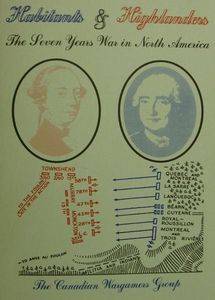 Subtitled The Seven Years War in North America, this game covers what those in the USA call the French and Indian War. The 72-page booklet contains a lot of historical background, discussions of geography, tactics, uniforms, flags, and two different sets of miniatures rules, 11 detailed scenarios (with maps, starting forces setups, terrain, etc.), and a campaign game called "Wolfe and Montcalm." The latter includes not only rules, but a page of counters to photocopy and glue to cardstock as well as an 11"x17" map (~A3 size) with point-to-point movement to move the counters on. One set of miniatures rules is called Battle Scale (each figure = 50 men), and the other Skirmish Scale (1 figure = 1-5 men). Rules are given for movement, morale, ranged fire, melee combat, Indians, Rangers, European Line troops, local militia, ambush, etc. Leaders are handled extremely well in this game. Each leader is rated as one of Brilliant, Efficient, Plodding or Buffoon(!). Ordinary playing cards are used to determine a number of actions each leader may initiate. Cards used include Aces (one action), 2s and 3s (2 and 3 actions, of course) and Jokers (2 actions and reshuffle). A Buffoon's deck has only one "3" card in it, but four aces, while a Brilliant Leader's is the opposite. Scenarios include both Battle Scale and Skirmish Scale settings. Braddock's Defeat, Battle for Lake George, a raid by Rogers' Rangers, Scaling the Heights of Abraham at Quebec City, and many more, are all represented. The campaign game can be played as a separate wargame, or used to generate Battle Scale miniatures games, as you wish. Rules are provided for the counters if you don't wish to take the battles to the miniatures table. All in all, a fine and informative set of rules.