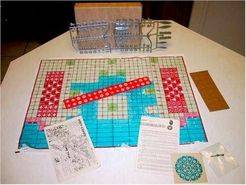 Was marketed by the Helen of Toy Company by mail order from the back of comic books in the 1960s and 1970s. This game of modern warfare was played out with plastic pieces on a map made of very thin plastic. The square grid shows a horseshoe landmass with an island in the middle. Players set up on opposite ends of the horseshoe and prepare to fight it out. Results are achieved via a spinner. Pieces include aircraft carriers, battleships, smaller cruisers, delta wing jets and tanks. There are also cardboard markers showing either the Maltese cross or the British three-ringed circle.