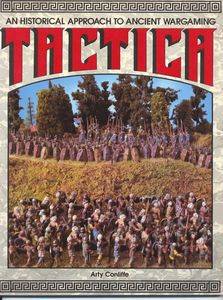 This rules system is an attempt at producing an historically accurate portrayal of ancient warfare. Attention is paid to how units formed, moved and fought. Several periods and armies are covered including the Greek wars and the Punic wars. The game requires large numbers of figures. Army lists are pre-made and are only marginally customizable. The rules are fairly simple and quick.