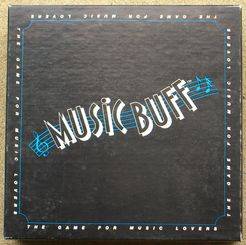 2 cassettes contain short instrumental versions of 240 pop songs, heard on the radio between 1955 and 1985. The object of the game is to be the fastest at naming the song title and the artist that made it the biggest hit. Instructions for 4 other games that can be played with the same elements are also included. Music Buff is for 2-10 adult players or teams, and can be played anywhere you can take a portable cassette player.