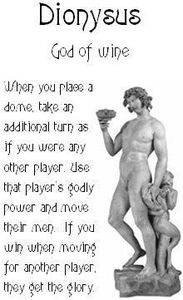 Santorini's first three expansions each bring six more Greek gods into the competition. Every game each player chooses a god to follow. EXAMPLES: Cleo, the muse of history, pops up at the most inappropriate times to remind others of the past and block their future... Dionysus, the god of Wine, intoxicates opponents causing them to topple from the escarpments... Demeter, goddess of fertility, enjoys the boon of her large number of followers thanks to her prohibition on contraceptives... Apollo has his mind set on his latest seduction who he will use and then throw away like a broken lyre... Cronos, keeper of time, plays with expectations of the future... All the fickle gods are at each other again and Santorini is their stomping ground! There are thousands of godly combinations - each resulting in a game of depth, originality and ignominious humiliation. Expands: Santorini