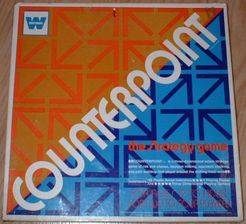 Counterpoint consists of a raised dark golden plastic board (two inches high and thirteen and a half inches in width and length... it fits rather precisely into the square box), four plastic player markers (green, red, blue, and yellow), and a single six-sided die. There is no instruction manual; the instructions are printed on the back of the box's top. The player markers are slightly oddly shaped for no apparent reason, and somewhat resemble modern art that's not supposed to look like anything in particular. Stand a rectangle up so it's tall, then cut a very wide and short triangle out of one side, and that's the basic shape. The board has a number of odd features. The center of it is a square that sinks down slightly into a square piece of black foam. This is where the die and player pieces rest when the game isn't being played. Around the center of the board is a narrow track with black and white arrows that can be flipped horizontally to show an arrow pointing in the opposite direction. In one direction, the arrow is black and the background is white... in the other direction, the colors are reversed. Each corner of the board has a tiny colored slot for the appropriate player piece to rest just before start... however, the groove isn't very deep at all and it's easy for the tall pieces to get knocked out. The game is very simple. Two players take a clockwise route along one side of the track, and two others take a counterclockwise route along the other side. A player rolls a die, and moves his piece the appropriate number of spaces. If the final resting place for his piece is on a spot where the arrow is turned the wrong way, he must move back to the closest arrow that points in the proper direction, and then flips any arrows he wishes on the board equal to the number rolled on the die. The first player that makes a full circle around the board and lands on or passes his starting point wins.